On 31st August, 2016, news about the economic recession of one of Africa’s largest economies flooded hundreds of media outlets. BBC Business news reported: Nigeria has slipped into recession, with the latest growth figures showing the economy contracted by 2.06% between April and June.

While news about Nigeria’s recession disseminated all around the world, the morning of September 1st was darkened by an annular solar eclipse which swept through Madagascar and several locations in Central Africa, with the moon’s shadow cascading over parts of the Atlantic and Indian Oceans.  The eclipse appeared to summon in a new era of uncertainty for Nigeria, and typical of the phenomenon of eclipses, the ramifications may as well go beyond Nigeria.

The country is the most populous in Africa; and in the context of West Africa, it stands alone as the economic giant. Furthermore, Nigeria’s annual GDP often surpasses the sum of the GDPs of over 10 countries in the sub-region. With the country striving to maintain its status as the second largest economic power in Africa, a recession has dire implications for the wider sub-region.

A recession is often identified as a period of massive economic decline, indicated by a fall in the GDP of a country in two consecutive quarters. Although less severe than an economic depression, a recession is associated with high levels of inflation and unemployment as well as a general slump in stock markets. For this reason, most people perceive recessions in absolute economic terms by focusing on micro-economic indicators such as a falling purchasing power and rising Balance of Payment deficits. However, there are always fundamental factors that account for a recession beyond these economic indicators which are, at best, symptoms of the elementary causes.

What are some of these fundamental factors? In the case of Nigeria – the world’s sixth largest oil producer – the governance of the nation’s maritime environment lies at the epicenter of several economic challenges. As a matter of fact, maritime insecurity largely accounts for the recent nose-dive into recession and has driven down investments and economic activity.

The Ticking Clock of Maritime Insecurities

Several economists have hinted at business cycles which purport to indicate how often recessions will occur and how long they will last. Nonetheless, recessions have plagued economies in varying ways; sometimes spanning just a few months and at other times, lingering on for years. It is generally assumed that ten years should be enough to lift a State completely out of recession. Interestingly, in the case of Nigeria, ten years of ocean governance deficit from 2006 to 2016 is what has accounted for a huge plummet in Nigeria’s oil revenue and GDP.

Following the ticking clock of piratical activities in the region, a sense of grave insecurity has been unleashed in Nigeria’s maritime domain, rippling throughout the Gulf of Guinea. This has gravely impacted shipping, maritime commerce, fishing and offshore hydrocarbon activities – cumulatively destabilizing Nigeria’s economic balance. An indication of what was to come in Nigeria’s future became clear with the incident in 2008 involving the attack on the Bonga facility – a major oil facility belonging to Shell, located about 120km offshore. The attack led to a substantial drop in Nigeria’s oil production and a rise in global oil prices from $110 in May to $130 in July. The gloomy repercussions of such attacks were what induced the government to enter into an amnesty arrangement with the Movement for the Emancipation of the Niger Delta (MEND) group leaders, who claimed responsibility for the Bonga attack. The agreement required insurgents to lay down arms in exchange for monthly stipends and technical/vocational training.

Failed Amnesty and Resurgence of Insecurity

The amnesty was necessary because Nigeria needed some form of economic security. Thus, from the perspective of offshore exploration, security of the Nigerian economy and the security of the larger sub-region, there was great prudence in an amnesty arrangement. Indeed, the amnesty paid some dividends, as it led to the cessation of attacks and resulted in renewed buoyancy of Nigeria’s oil industry and economy. At regional level, there was also some relief as the high level of insecurity that engulfed the Gulf of Guinea, especially between 2008 and 2010, declined.

Nonetheless, it was also clear from the onset that the amnesty was a fragile arrangement. Not only was there lack of transparency of the process and accompanying financial ‘settlements’, but the main beneficiaries of the amnesty proceeds were the very top level militants/insurgents that in the first place accounted for the insecurity. The arrangement was also cast in the realpolitik of Nigeria, where the ex-President Goodluck Jonathan had to balance the need to ensure the security of Nigeria and its economy with satisfying insurgent leaders. Notably, there was always some form of symbiotic relationship between the former president and the insurgents; he was governor in one of the states in the Niger Delta region before assuming office as president, during which he allegedly kept close ties with the insurgent leadership as part of his political surety.

With President Buhari coming on board with a stern promise to stem out the illegal political-economy in Nigeria that accounted for the syphoning of huge sums of Nigeria’s money – particularly oil revenue – there was always the chance that the tide would change….that there would be a close-up on the insurgents…and that the insurgents, in fury, would eventually re-emerge. This expectation was soon to become a reality. Indeed, tensions rose rapidly early this year as President Buhari waged his anti-corruption war, investigating Governor Tompolo, who was alleged to have wrongfully benefitted from million-dollar contracts, while serving as a conduit for syphoning huge sums. Tompolo was (is) an insurgent leader with strong following in the Niger Delta region.

This is where issues of accountability, criminality, politics, security and the economy cross lines. It is this realpolitik of Nigeria that led to the new phase of the insurgency, with new groups adding to the maritime insecurity profile.

The first figure depicts the intensity of insecurity in Nigeria’s maritime domain – putting together piracy attacks (actual and attempted) as well as attacks on oil and gas infrastructure (offshore and onshore) from 2008 to 2015. Figure 2 shows the changes in Nigeria’s crude oil production over the same time period. 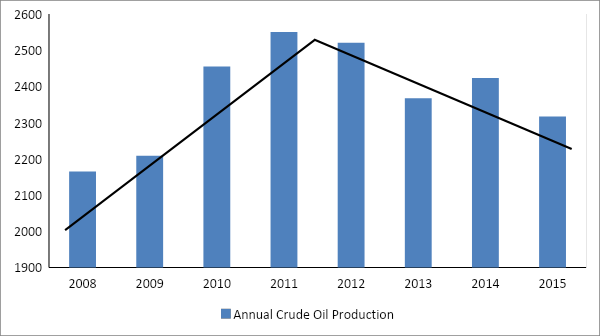 Fig. 3 below depicts a steady decline in Nigeria’s crude oil production in the first and second quarters of 2016. In July, 2016, the country’s oil production fell as low as 1.27 million barrels per day, the lowest level recorded by Nigeria in 22 years. Furthermore, OPEC’s Monthly Oil Market Report revealed that Nigeria showed the largest drop in oil output (51.2%) between July and August 2016. Benchmarking this against the maximum crude oil production capacity of about 2.5 million barrels per day, it is apparent the output of the African oil giant in 2016 has fallen far below standards.

While a number of factors may influence Nigeria’s oil output, the decline in oil production this year has been largely attributed to attacks on oil pipelines in the Niger Delta region. In particular, the Niger Delta Avengers – a militant group – have posed a growing threat to maritime security in the region, claiming responsibility for a series of attacks on oil and gas facilities in the southern Niger Delta Region.

In July, there were 13 separate attacks claimed by the Niger Delta Avengers and these may well have accounted for the record-low oil output in Nigeria.

Figure 4 below graphs out Niger Delta attacks as at 31st August, 2016. The chart reveals a steady rise in Niger Delta hostilities over the period, in contrast to the steady decline in crude oil production. As a matter of fact, some reports indicate that Nigeria has lost over N1.1 trillion in oil reserves since the resurgence of militancy in the Niger Delta region (see https://www.naij.com/945910-nigeria-loses-n1-1trillion-oil-revenue-due-niger-delta-militant-attacks.html). 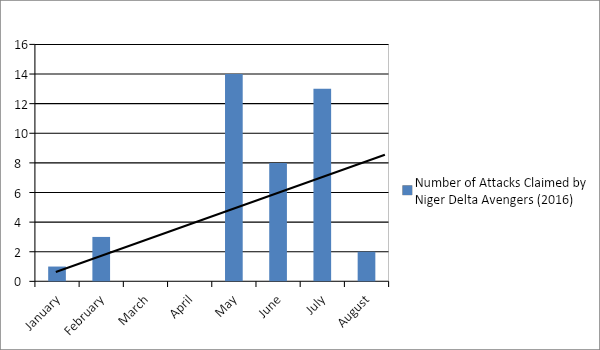 On 30th August 2016, the Niger Delta Avengers agreed to halt hostilities, having stated just a week earlier that it was ready for a ceasefire and dialogue with the government. The move towards this ceasefire largely accounted for the decline in attacks in August. Nonetheless, much like the failed amnesty arrangement just a few years earlier, the ceasefire was a highly fragile arrangement.

On 15th September 2016, it was reported by Reuters that the Nigerian “oil ceasefire” was threatened by local anger at the military over the death of an elderly local leader. If the insurgency should continue, the future may be rather bleak for Africa’s most populous country.

The economic potential of every country is both on land and sea. On the average, the sea constitutes close to 70% of the land mass in most States and for some countries in the Gulf of Guinea their maritime estate is three to five times the size of the country’s land.  In many ways, however, the sea is the anchor of the economic success and development of coastal states. Sea lanes are crucial for imports and exports as the sea connects multiple States. Furthermore, the sea offers immense opportunities for offshore oil and gas exploration, fisheries and the pharmaceutical industry. What this means is that occurrences in the maritime domain have serious implications for any economy. In more recent times, the global community has suffered substantially from piracy off the coast of Somalia, especially at the peak of the menace in 2007-2010.

In 2012, maritime insecurity nearly brought Benin to its feet when the country lost almost 80% of its maritime revenue and a substantial portion of its fisheries income. More disturbing is the fact that the report, The State of Maritime Piracy 2015: Assessing the Economic and Human Cost, described the Gulf of Guinea as the most dangerous region for seafarers and stipulated an estimated economic cost of $719.6 million to States for 2015 alone. What this means is that countries bordering the Gulf of Guinea and the larger global community have to effectively deal with issues of maritime insecurity in order to eventually address the wider array of economic contingencies.

The larger implications of maritime security for the sub-region in terms of economic development and peace and security were vividly captured in the subject-matter of UN Security Council Resolutions 2018 and 2039 and the Council’s Presidential Statement of April 2016. More specifically, Nigeria’s recession has shown that ocean governance and maritime security must be taken seriously in the Gulf of Guinea. The relatively low number of incidents in the Niger Delta region compared to high levels recorded at the peak of Somali piracy around 2006 tend to understate the urgency with which the maritime security needs of the Gulf of Guinea have addressed; but as key regional experts have indicated, Gulf of Guinea piracy is not about the numbers.